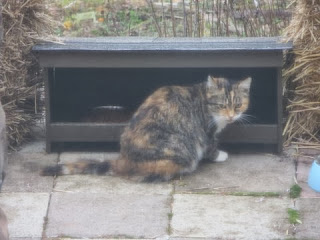 FACT 1--You have to lead these cats slowly for their welfare.  They are scared at first, hyper-vigilant, wary and ready to freak and run.  The kind thing is to let them.  But then...

If you don't have patience when you start, you will learn it.  We started by leaving dry food.  Last summer a red tabby we named Lancelot came to us with a kitten.  After a week, the kitten didn't come and I'm hoping it was rescued.  However, Lance was injured as if he'd protected the little one in battle.  When we saw Lance had trouble eating, we switched to canned food.  He began coming regularly in the late afternoon only at first.  But then he began coming in the morning, too.  He started talking to us and rubbing against our legs.  He began taking naps for longer periods under the brush around the patio.  I spent many afternoons on the patio with him--working, taking a break, breathing.  We set up two shelters and I sprinkled the doorway and top of the shelters with catnip.  One day rain poured down and Lance stayed there all day.  After that, if his mouth hurt when he ate, he ran to the shelter until he felt better.  Around this time, he made the decision to stay.  He was ours.  He wasn't going anywhere.  That's when we captured him to take him to the vet, that's when we learned he had FIV, that's when we learned we couldn't bring him inside with our other three "inside" cats.  Thus began a journey in expense, energy and commitment that we were taking on.  ...Until the end came much more swiftly than we expected.

FACT 2--Most feral cats do not like confined spaces.  At first, Lance wouldn't go near the sunporch off the basement.  But eventually I could convince him to eat in there.  When it rained one morning, he sat in there with me.  After his first vet visit and neutering, that sunporch became his home.  This confined space became tolerable to him though he enjoyed most sleeping on a chair between the sunporch and the basement door.

FACT 3--Lance learned that catnip identified his "safe" places.  Almost daily, I sprinkled catnip in the door of the shelter and on top.  I also wafted it outside the doorways of the feral shelter that was different  from the others.  I also smoothed it on a rug I wanted him to use or a place that would be good for him to lay.  He was afraid of new surfaces.  But the catnip made them tolerable.

FACT 5--Feral cats never really play.  They lie on their backs in the sun.  They watch butterflies and bees with respective awe.  They live and let live with creatures they know won't hurt them.  But they don't play.  They expend all their energy on survival.

After Lance, we weren't sure we could ever take care of an animal like that again.  We saw two other cats come and go who seemed to have other homes--Romeo and Guinevere.

But then one night last week, a new smaller cat, a red tabby,  fed at the feeder.  He was a smaller version of Lance.  His markings are so similar.  A calico has also appeared.  She looks to be the same age as the red tabby and has similar facial structure.  They might be brother and sister.  They only appear in the late afternoon now and don't realize yet they can be safe here, that there are shelters with heat pads, that we can be friends.  Hopefully in patience and with time, they'll decide if they want to stay.  Then the real care will start.  Then I'll let myself name them and love them no matter what happens next. 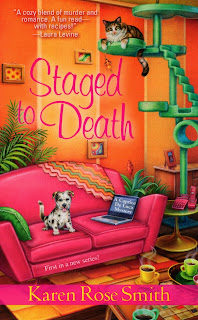 Pre-order STAGED TO DEATH on Amazon