Seven Lessons I Learned About Feral or Homeless Cats, Part 1

Here are the seven lessons I learned watching and communing with feral cats:

They are fascinating to watch and to know

They go where they want

They do what they want

They tolerate kind humans...sometimes from a distance

They only associate with particular other cats

They can wrap themselves around your heart just like inside cats

They need a different kind of care


At the present time, three homeless or feral cats visit us.  We have named them Lancelot, Romeo and Guinevere.


My husband and I entered the world of feral cats by accident.  I've always been a cat lover since my dad brought home my first yellow tabby kitten from a farm when I was six.  (That male inside/outside cat actually allowed me to put him in a doll stroller and wheel him around the yard!)  My husband, on the other hand, never had a cat, but since he married me has learned to love them.  Twelve years ago we adopted half sisters, Ebbie and London.  Although cats have the reputation for being independent and aloof, these two are affectionate cuddlers who have been my constant companions.  My husband retired and truthfully, we never thought we'd adopt another cat.  But then last summer, we found a tiny black kitten (Zoie Joy) in our backyard shrub and a new world seemed to open up.  We've lived at our present location over 20 years and never before found a kitten in our backyard, though there is a farm behind our property.

Last fall we saw a black cat now and then who had the same quirk in her tail that Zoie has.  Hating to think of Zoie's mom out there and hungry, I began putting dry food on a stepping stone.  When it snowed, we would see cat paw prints to and from the stepping stone.  Through the spring, however, we no longer caught sight of the black cat.  Still, I religiously put food on the stepping stone.

Then one June evening this summer, a yellow tabby appeared with a kitten.  They ran at the slightest noise.  We put out a dry food feeder along with using the stepping stone.  The pair only showed up in the evening.  We were having many storms, so we bought an "igloo" as a shelter and tried to insert it into shrubbery where the cats had often been.  During the same week, another yellow tabby appeared and ate in the evenings.  We dubbed this cat Romeo.

At the time, we assumed the cat with the kitten was female.  After about a week, the kitten no longer appeared.  I had talked to our vet about capturing Momma and baby but hadn't taken steps to do it.  Up until this time, we only saw these cats from a distance or from a window.  I was upset when the kitten disappeared but hoped it had been rescued.  I knew a family in our neighborhood had rescued several kittens and they had both inside and outside cats.

The "Momma" cat still came regularly in the evenings.  From her first visit, I could tell one of her cheeks was swollen.  She also had a large sore spot on her cheek and back as if "she'd" been in a fight.  I had to get closer to see what I could do.  We didn't want to capture "her" if she was returning to kittens somewhere.  I began sitting on the patio in the morning and evening.  The cat came and ate and I began talking to it in a low voice.  I soon discovered this was Dad, not Mom.  A Twitter friend mentioned that a male cat taking care of kittens isn't unusual in the feral community.

Instead of Momma, we named this cat Lancelot, Lance for short, because he'd obviously gone into battle for his family.  When he would bring the kitten to eat, we watched him patrol the perimeter of the property, guarding the kitty until it finished eating and dashed safely under a bush.  He was protective of that baby and now he needed our care.  He had difficulty eating and chewing because of the injury to his face.

I knew we couldn't do much to help him until we built trust.  The best thing I could do was provide good soft food to help him heal.  Our vet had suggested Omega 3 to stir into our inside cats' food, but they wouldn't eat it.  I stirred it into Lance's and we invested in a feral feeder to protect food and water. (The trays under the dishes are filled with water to keep ants at bay.) 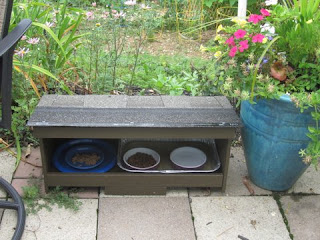 One evening I sat on the patio and Lance appeared.  I swear he could appear and disappear like  a phantom!  I stayed very still and spoke conversationally in a low calm voice.  After he ate one dish, I prepared another.  He ate that, too.  Then a third.  He was malnourished and his wounds hurt my heart.  But he startled easily and ran without much provocation.  Caring for his basic needs was essential.  My husband began joining me on the patio and Lance accepted his presence, too.  Trust was beginning to build.

More about Romeo, Lancelot and Guinevere next week!


My sleuth in my Caprice De Luca mystery series rescues stray animals. My love of cats and dogs shines through her in STAGED TO DEATH, the first book in the series available for Preorder now. 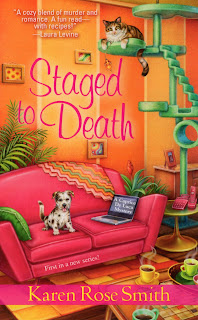 Preorder STAGED TO DEATH at Amazon

Preorder STAGED TO DEATH at Barnes and Noble

What a great post! I am a cat lover myself. We have two indoor kitties we rescued from the local animal shelter years ago. They run my life, but are also my best buddies and curl up and sleep near me every time I write. I think it's wonderful the way you are caring for Lance and the other cats who take sanctuary in your garden.

I definitely have a soft spot for kitties. When I was a kid, my cousins lived on a farm. I went there often and tree were always cts and kittens around the barn. I guess the connection began then. Thanks for commenting.

Wonderful post and I'm so glad you have the heart and patience to help the stray kitties. I worked part time at a greenhouse where a stray cat came along. Surprisingly, he was friendly. We hoped someone would come looking for him and take him home. However, after three months we discovered he was very ill. I took him home and nursed him back to health thinking I'd find a new home for him. My husband, who initially was upset with having another animal in the house, vehemently refused to let anyone take him away. He's such a sweet boy.

Once a kitty walks over your heart, there's no turning back. My husband is really a softie too. He and our latest adoptee have a special bond. Thanks for sharing.