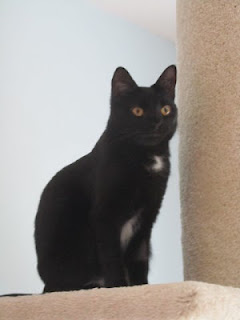 We knew we'd have to have Zoie Joy spayed.  That was the responsible thing to do.  But I had qualms.  She's an inside cat along with her two sisters.  Was it necessary for her health?

We decided it was necessary after reading more about urinary problems later in female cats' lives as well as higher incidences of mammary cancer. Spaying also eliminates the chances of  a cat contracting pyometra, a  bacteria that attacks the uterus of cats and is a potentially fatal infection.  Still...

Our two older cats had traumatic experiences when they were spayed.  Ebbie's back was never the same afterward.  She would straighten when picked up and not let us touch a particular spot.  After spaying, London shook whenever we put her into her carrier to take her to the vet.  Our son's cat didn't want to be touched for a very long time after her surgery.  So I was worried.

Years ago, Ebbie's holistic vet advised us to wait until after her first heat to have her spayed.  A friend who has several cats advised the same.  Something about that being the best for them with hormones and growth factors and future health.  I spoke with Zoie's vet about it, and she agreed.

It had been a long time since I'd been around a cat in heat.  At seven months, Zoie went into heat, but it only lasted three days and was very mild.  Christmas was coming and we were supposed to travel, so I decided to wait until January to schedule Zoie's surgery.  (The vet needed a month to six weeks notice.) At eight months at the beginning of December, Zoie went into full heat for nine days.  She was in obvious discomfort and just wanted her belly rubbed.  She also wanted to snuggle with Ebbie, though Ebbie wanted no part of that.  At that point she was just tolerating her.  But by the end of a few days, Ebbie would let her sit beside her and share body heat.  It was easy to discern when Zoie went into heat and when it was finished.  Like night and day.

So two weeks ago, we took Zoie to her vet at 8:30 a.m.  She couldn't have food from 9 p.m. the night before.  She could have water.  It was so difficult to hand her carrier to the vet tech.  I kept busy all day.  The tech had informed us that Zoie would have internal stitches that would eventually disintegrate.  They used skin glue on the outside of the incision.  Most important after she came home--we couldn't let her lick the incision.  If she did, we would have to wrap her in a T-shirt (seriously?) or get a collar that would prevent it.

I had cleaned out the bottom of my bedroom closet because Zoie likes to burrow and nap in a dark place.  We layered a crate mat and towels.  We also barricaded the underside of  the bed and dresser so she wouldn't be able to sneak under there to hide.  With Ebbie and London, I spent three days on the floor with them, petting and visualizing healing.  The vet told us to keep Zoie and her sisters separated for three days to a week.  This all depends on the cat who is being spayed and her siblings' attitudes.

The vet called around 1 p.m. to let us know Zoie had come through surgery and was doing well.  We could pick her up after 3.  I couldn't wait to get her home.  We arrived about 3:30, and when the tech brought us her carrier, she was meowing.  We had received instructions again, including a list of the medications she had been given.  (The cost was $200.) We had pain medication (an anti-inflammatory) and we were to give her a pill that night and one pill the next two days.  We were supposed to apply a warm compress for five minutes twice a day for five days.

As soon as I had Zoie in her carrier on my lap in the car, I reached inside to pet her.  I knew this could be a bit of a test.  If she shied away from my hand, it could take a while to earn back her trust and affection.  But she didn't shy away and I was so relieved.  At home, we opened the carrier and she went into the closet, rooted around a bit and chose her spot.  From the moment we picked her up, we kept talking to her and reassuring her.  As she lay on her bed in the closet, I stroked her and talked to her.  We were supposed to wait about an hour before offering her a teensy bit to eat.  She seemed to want us to stay with her, so my husband and I took turns with her.

Zoie has always been a good eater and when we offered her a bit of her favorite food, she gobbled it up.  But then she rested again and we resumed stroking her.  I'm a huge believer of healing touch.  And if Zoie wanted it and needed it, we were there.  When we offered her food again, we put half a pill in it.  I guessed we'd have a better chance of her eating and swallowing it if it was small.  The vet was okay with that.  When she ate again, we gave her the other half and she gobbled that down, too.  About an hour after that, she came out of the closet and wanted to find her sisters.  The closet was no longer where she wanted to be.

We decided to put her in the room where she usually spends her nights--my office.  This is familiar territory for her.  My husband had put a mattress on the floor with her favorite cover.  He slept on the floor on the mattress (yes, he's a good guy) to watch over her.
Pilling Zoie wasn't quite as easy the next two days.  About half the time she ate it in her food.  The other half, with food on the pill, we put it far back on her tongue and gently held her mouth shut until she swallowed.  She was such a good little patient.  When we applied the warm compresses, she would purr!  We managed to keep her separated from her sisters for four days.  She slept much of the time.  But on the fifth day, it was as if her energy was turned on again.  No way would she stay in my office.

We knew Ebbie wouldn't be a problem interacting with Zoie.  Zoie went to Ebbie and we watched them carefully.  But Ebbie just curled up to sleep and Zoie scampered off exploring.  Usually London and Zoie run up and down the steps and chase each other, but Zoie was restraining herself.  We kept close watch but they all behaved!  Each day Zoie became more active until now, two weeks later, she's back to normal. 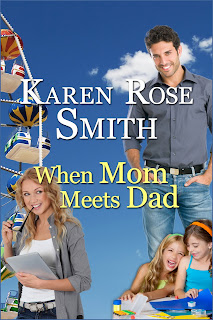 WHEN MOM MEETS DAD on Amazon

Happy to hear that Zoie is feeling better. And, kudos to Ebbie for offering some sympathy and comfort.