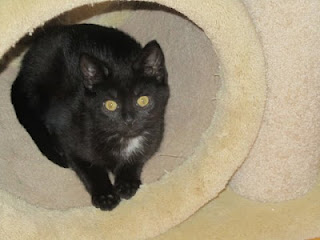 To catch up from the past few blogs...

Zoie had two veterinarian visits and took over my office as her living quarters.  It was already kitty-proofed from Ebbie and London.  While Ebbie had no contact with Zoie, although we washed our hands constantly, Ebbie's eye began to run though Zoie's were clearing.  The vet prescribed L-lysine for both, determining they had the Feline Herpes Virus in their systems.  The best management technique was to limit stress and give the antiviral treatment L-lysine.  This was the first time Ebbie was under this kind of stress since we adopted her. 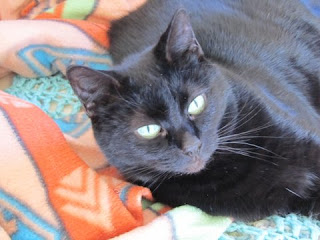 Ebbie took liquid medicine easily as the sick baby we brought home on a snowy day.  But now she's particular.  She can always taste it in her food or smell it and will have nothing to do with it.  When she had digestive problems a few years ago and the vet prescribed a quarter of a crushed Pepcid, she did accept that in a dab of Reddi-Wip.  A few months ago Ebbie hurt her back and the vet recommended pet variety glucosamine.  I use heavy cream, whip it and empty some of the capsule into it.  As long as I don't go overboard, she eats it.

I didn't have to be concerned about Zoie taking medicine, especially in food form.  She gobbled up the L-lysine snacks.  But Ebbie wouldn't try them.  So we got an alternate choice--L-lysine gel and I mixed that in the whipped cream.  Success.  Ebbie didn't seem to smell or taste that.  I also started mixing a few of the L-lysine snack pieces with her food at night.  They were a different color from her food so I could tell if she was eating them.  Slowly, one piece started disappearing and then another.  London doesn't eat out of that dish, so I could keep my eye on exactly who was eating what.  Both were on the road to recovery, yet I know that the Feline Herpes Virus can never be cured...just managed.

Zoie's digestive problems cleared up with the anti-inflammatory medication the vet prescribed, but her second test for round worms was still positive.  Thank goodness we'd kept the cats separated.  So we had to worm her again.  When those results were clear after our third vet visit--she received her last vaccination that time--we could start to integrate our family.  (This was over a month after finding Zoie in our backyard.) During the time Zoie was in my office, Ebbie and London knew another cat was in the house.  London would sit by the closed door, watching it.  Ebbie was still trying to deny what she was hearing and scenting and it was obviously stressing her out. She was afraid without knowing what she was afraid of. 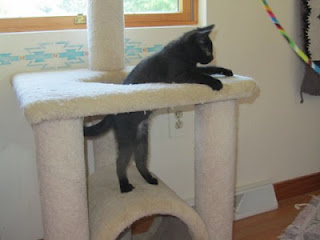 We had used an introduction technique when Ebbie and London were babies that I detail in my mystery.  (My amateur sleuth takes in stray animals and finds them homes.)  When we introduced London to Ebbie over eleven years ago, this is how we did it.  Ebbie was upstairs.  We brought in London in her carrier and set her in my office.  Then we went upstairs with Ebbie, let her out of the bedroom and went downstairs with her to "find" London.  Ebbie smelled around her carrier for about a half hour.  With no adverse reaction, she seemed ready to meet her new sister.  We let London out, they began chasing each other, then settled near each other looking out the window.  Easy, right?  They were both kittens with about six months age difference.  They were also half sisters. 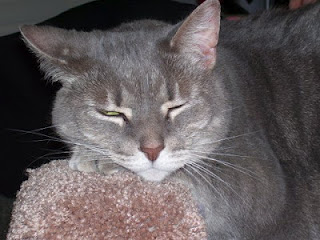 I was excited as the time came to introduce Ebbie and London to Zoie.  After we got the all-clear from the vet on Zoie, we put her in her carrier and set her in the kitchen, a central location.  That day London walked up to the carrier and realized a cat was inside.  She hissed and ran.  Ebbie heard Zoie's meows, went to her steps by the window without even being tempted by going to the kitchen, curled into a ball with her head on her paws and wouldn't come down.

Maybe not so easy this time!

More of the kitty integration next week. 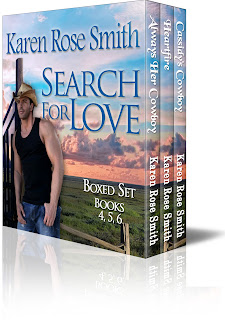 You guys are making progress! Hopefully all the critters are happy together soon.

Liv--We're working on it! I feel like a parent again. Thanks for stopping by.

Angela--Yep! I feel like a mommy again. It's a nice feeling.