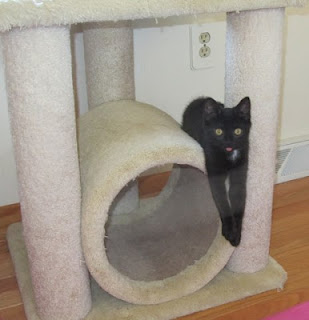 Before I continue Zoie's saga, I want to tell you a little about Ebbie, one of our eleven-year-old cats, another black beauty.  I've always believed my mom sent Ebbie to me.  She was one very sick kitty when I rescued her from a friend's farm.  My mom had died and even years later, I was still missing her terribly.  So that snowy Christmas week when I picked up some galleys my friend was proofreading, I brought Ebbie home.  I stayed up nights with her while she was sick, massaging her sinuses so she could breathe.  And ever since that day, she's filled a hole in my heart and given me unconditional love and affection.  So I knew the process of taking in Zoie wasn't going to be a simple one.  Yet I was in it...and committed...and that was that.

Less than a week had passed since we'd rescued Zoie Joy from inside a bush in our backyard.  She was only about six weeks old.   No one had claimed her and we'd already taken her to the veterinarian once.  We had a second visit in three weeks.  Zoie's eyes were still running after a week so I called the vet and she ordered antibiotic drops for her eyes.

We kept Zoie in the sunroom for ten days then decided to bring her into my office in the main part of the house, yet keep her separated from Ebbie and London.  My office has a hall and a double door leading into our kitchen, so this was easily possible.  In my office I didn't have to worry about Zoie hurting herself on a concrete floor because scattered rugs dotted the wood floor.  My office already had a kitty condo, scratching tree and litter boxes.  There was also one in the main part of the house. We started a new litter box to have two for Ebbie and London outside of my office.  Our vet had recommended one more litter box than we had cats.

A few days before Zoie's next appointment, she developed diarrhea probably from too much dry food and too much water.  After another call to the vet, I watched her carefully to make sure she was still eating and drinking and playful until our vet visit. Dry food makes animals drink more than they would with wet food.  I'd been trying to leave a scoop between wet food feedings so she'd have food on demand when we weren't with her.  I was feeding her about every hour and a half except during the night and in the afternoons when she slept.  We still had her separated from our two older cats, Ebbie and London.

During the second vet visit, the doctor prescribed an anti-inflammatory medicine twice a day for the stomach disruption, gave her the second distemper vaccine, and rabies injection.  She said to continue to feed her on demand, but no dry food, just wet, until the medicine was finished and she seemed well.  Then we could start the dry food again, little by little.  For Zoie, the dry food was like candy to a child.  She would stop eating her wet food when full.  But the dry...  She would keep gobbling it until it was gone.  The doctor said to keep her separated from the other cats until both the eyes and digestive issues were resolved.

Zoie didn't mind noise from weather like rain or thunder or outside noises like vehicles or mowers.  But she was afraid of voices and anyone other than us.  She became familiar with my office, one section at a time, exploring thoroughly before proceeding to the next.  We supplied her with toy mice, balls with jingle bells, her beanie baby bear, and a wand with a flannel strip that we put away every time we left so she didn't get tangled in it.  Oh, and those mice?  I pulled off their eyes and ears which didn't seem to be attached very well and cut off their tails.  One of our other cats choked on one when it came apart.  There are no standards for animal toys so they have to be checked.  I found a couple of chew toys that Zoie could chew to her heart's content and I knew they would be safe.  I spent most of my days in the office with her with the television turned on to HGTV.  No explosively loud commercials!! 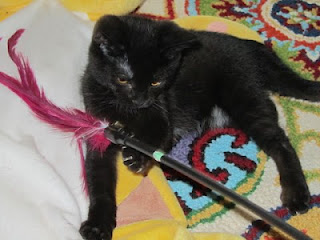 To add a bit of complication to this story, Ebbie had a virus when we rescued her that I was told would stay recessive in her system although we'd cleared up the secondary infection.  I also knew stress could make it reemerge, though it never had.  In the midst of our Zoie adventure, Ebbie had an appointment for a rabies injection.  I give our cats homeopathic remedies before and after treatment that a holistic vet had recommended and prescribed.  Even so, after a rabies injection a few years ago, Ebbie lost her hair at the site of the injection in a three-inch circle for about six months.  Afterward, I discovered the agent the company used to distribute the vaccine was mercury.  That vet wasn't concerned when I called to discuss it, so we changed vets.  Our new more-concerned, better-informed vet told us about other companies' vaccines that aren't as harmful.  But this time, I was worried.

Ebbie is my intuitive cat and we have a sister-like bond.  She knows when I'm hurting and always consoles.  She's my constant companion, sweet, and would never hurt me or anyone else.  She's a pacifist!  Even though she hadn't seen Zoie, she knew she was around.  Even though I washed thoroughly and changed clothes, she knew.  She began withdrawing.  I think it was a case of fearing the unknown.  Without any physical contact with Zoie, Ebbie's eye began running a week after her rabies shot.  So she had another visit to the vet.  He prescribed L-lysine snack pellets...or a powder or a gel.  He felt the conjunctivitis in her eye stemmed from the feline herpes virus that is one of the most common causes of upper respiratory infection and eye problems in cats. It had laid dormant in Ebbie's system all these years.  The L-lysine is an amino acid that helps suppress virus replication.  In other words, it breaks the cycle.  But Ebbie is not and has never been a pill taker or kitty snack consumer.  I would have to be inventive.  He suggested that it would also be a good idea to treat Zoie, too, with half the dose. I would have to check that out with her vet.

More about meds and cats next week along with how the first face-to-face (or nose-to-nose) meeting between Zoie and Ebbie and Zoie and London progressed. 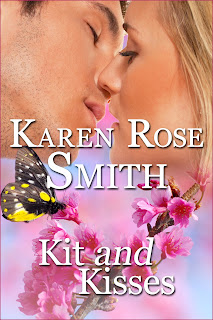 KIT AND KISSES by Karen Rose Smith on Amazon
Posted by KRS at 7:35 PM

Kitties are adorable. Bless you for taking them in!

Angela--Thanks for stopping by. Sometimes they're a lot of work, but it's worth it.