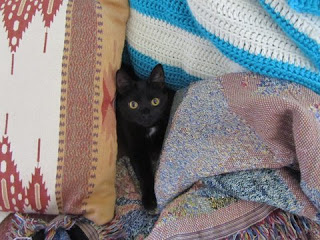 ONE OF ZOIE JOY'S PLAYFUL MOMENTS

In the last blog, I wrote about training a kitten.  We've been loving and training Zoie Joy since we rescued her last summer.  She's a smart kitty, maybe because of her hunter instincts.  Although her mommy took good care of her, taught her the basics and weaned her, we believe Zoie was living in the wild and got separated from her family in the wild.

Training Zoie not to bite and scratch went well with constant reinforcement and a resolute "no."  Some cats recoil and stop unwanted behaviors when their owner uses a water spray bottle as negative reinforcement.  That didn't faze Zoie in the least!  Maybe she was used to rain.  If you remember, when we bathed her, she didn't struggle at all and the bath went smoothly.  But other training didn't happen as we'd hoped concerning integrating her with London, our big gray female tabby and Ebbie, another kitty rescued eleven years ago who owns my heart.  Ebbie and I have a special bond.

Once we went through a few weeks of partial integration, we began letting the three of them relate during the day.  Zoie went back to my office and her safe places there to spend the night.  We created a routine with her.  As my husband finished some nighttime chores, I'd toss colorful mice with her and play with her at the wheel.  When my husband finished in the rest of the house, he'd come in, feed Zoie and then we would cuddle her and say goodnight.  When she heard the ping of dry food in her dish, she ran to it.  That's when we would leave.  She never cried when we did it this way.  Cats like ritual and knowing what comes next as much as their human parents.  In the morning, my hubby would feed Zoie in the office while I fed Ebbie and London in the kitchen.  (Zoie would go after their food).  But after they were all fed, we'd open the office door into the kitchen, call "Zoie's coming" to warn Ebbie and london, and off she'd go. 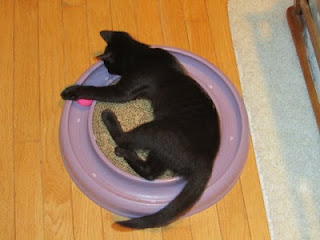 ZOIE PLAYING WITH HER WHEEL

Today I'll talk about her interaction with London.  From the outset, London let her know who was boss.  London's best napping place is upstairs in my husband's office.  Ebbie doesn't venture in there unless I do.  She stays mostly downstairs, especially in the first floor bedroom.  But Zoie considers the whole house as hers and tries to be everywhere all at once.  For eating and napping, she finds me and my husband.  But the rest of the time, she wants to play.  London is also eleven, in her sixties in human years.  Zoie is a playful child who wouldn't and won't let London alone.  From the beginning, however, she soon learned from London what her boundaries were.  When London would growl and hiss and swat, Zoie would back off.  At first, London would just watch Zoie and maybe shake her head in annoyed tolerance.  But after about three months,  they actually began to play together. 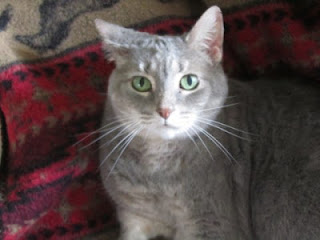 LONDON REFLECTING ON LIFE BEFORE ZOIE

Sometimes the thunder in the house sounds like a giant storm.  But it's just Zoie chasing London or London chasing Zoie up and down the stairs, around the upstairs hall, sliding on the throw rugs or playing in and out of the banister rungs.  At times, while London sits on the printer looking out the window, Zoie will dance around her, paw at her or just sit with her.  This week we had real progress--London and Zoie napping on the bed together.  It's a mommy-moment only true animal lovers can appreciate.  They are becoming friends. 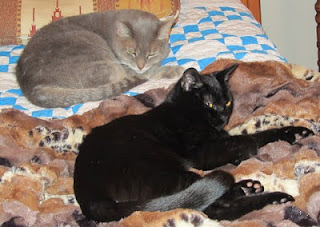 Last time I mentioned I'd discuss flower essences.  But those came into play with Zoie's interaction with Ebbie.  More the next time. 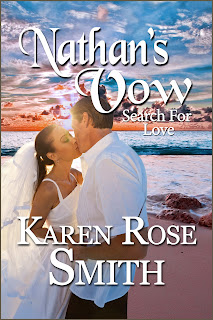 A new look for NATHAN'S VOW on Amazon

I love that "Before Zoie" picture of London.

London and Zoie's relationship is definitely evolving! They are cute, funny and exasperating to watch.