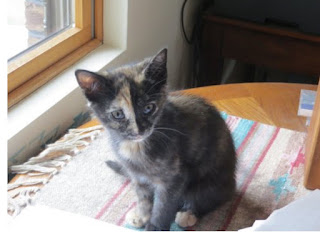 When our cat Zoie Joy was a baby, she lived in my office for a while and then spent nights there. Zoie was only 1 1/2 pounds when we found her in our backyard and for the first three months, she was usually on my shoulder or lap wherever I was working.

Three years later, Paddy aka Miss Paddington was born in a storage bin under my desk that had been prepared for her mom Halo.  Halo had been living in my office for a month before Paddy and her siblings were born. So Halo already considered it home. For the next three months, Paddy and her littermates took over my office with their wonderful shenanigans. After I found homes for Tia and Mason, Paddy's siblings, we integrated Paddy and Halo into the rest of the house with our inside cats, Zoie and London.  But at night, we still put Halo and Paddy to bed in my office.  Over two years later, that's still where they spend the night. 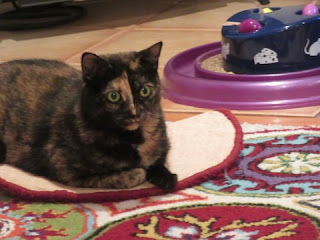 Halo and Paddy consider my office as "theirs." Paddy especially spends most of her time there. She often helps me with whatever task I'm about. I have to admit there are cat treats in my desk drawer and Paddy knows it. She can be awfully persuasive so I give her a few before I continue working.
After Paddy is satisfied I've given her enough attention, she settles close by, both on high perches and on the floor to watch whatever I check off my to-do list next.

Halo isn't as energetic as Paddy about interrupting me.  She'll lay close by or as in this photo, check over my work or contracts! 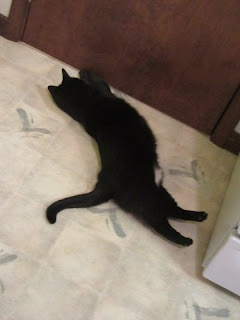 None of our cats like closed doors.  Zoie often waits outside my office in the morning until Halo and Paddy join her. 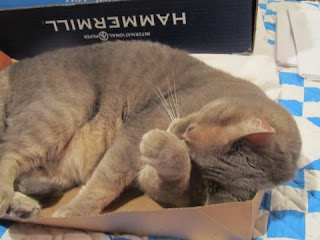 Our senior cat London used to spend time in my office too.  But now that's she's blind, she spends most of her time upstairs. When she's downstairs, we accompany her, using our voices to guide her. She and Zoie have a bond and they have the run of the house at night while Halo and Paddy are sequestered in  my office. 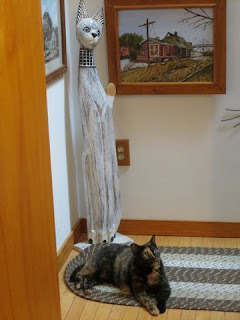 Paddy often guards the door to my office. If Zoie happens by, they play or chase each other.  Zoie seems to be able to get along well with anyone.
So the big question is-- "Do I find the cats distracting to have them in my office with me?"  There are distractions and then there are distractions. These cats are my kids. Usually they are content to just be near me which I don't find a distraction at all.  When they do demand attention, it's often at a time when I need a break from the computer or editing...to stretch and remember that life is about comfort, joy and the friendship and unconditional love of cats. 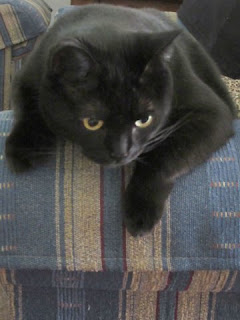 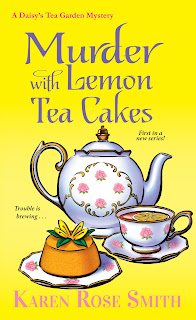 In an old Victorian in the heart of Pennsylvania’s Amish country, Daisy Swanson and her aunt Iris serve soups, scones, and soothing teas to tourists and locals—but a murder in their garden has them in hot water . . . Daisy, a widowed mom of two teenagers, is used to feeling protective—so when Iris started dating the wealthy and not-quite-divorced Harvey Fitz, she worried . . . especially after his bitter ex stormed in and caused a scene at the party Daisy’s Tea Garden was catering. Then there was the gossip she overheard about Harvey’s grown children being cut out of his will. Daisy didn’t want her aunt to wind up with a broken heart—but she never expected Iris to wind up a suspect in Harvey’s murder. Now the apple bread and orange pekoe is on the back burner while the cops treat the shop like a crime scene—and Daisy hopes that Jonas Groft, a former detective from Philadelphia, can help her clear her aunt’s name and bag the real killer before things boil over . . . Includes delicious recipes for Iris’s Lemon Tea Cakes and more!

Pre-order MURDER WITH LEMON TEA CAKES on Barnes and Noble

USA TODAY Bestselling Author Karen Rose Smith is an only child who delved into books at an early age. She learned about kindred spirits from Anne of Green Gables, solved mysteries with Nancy Drew and wished she could have been the rider on The Black Stallion. Yet even though she escaped often into story worlds, she had many aunts, uncles and cousins around her on weekends. Her sense of family and relationships began there. Maybe that's why families are a strong theme in her novels, whether mysteries or romances. This award-winning and bestselling author will have her 100th novel released in 2018.  At present she is working on two mystery series for Kensington Books--Caprice De Luca Home Staging cozies and Daisy's Tea Garden mysteries. From time to time, she also writes romance for Harlequin Special Edition.

Readers often ask her about her pastimes. She has herb, flowers and vegetable gardens that help her relax. In the winter, she cooks and does watercolor paintings rather than gardens.  And year round she spends most of her time with her husband, as well as her four rescued cats who are her constant companions. They chase rainbows from sun catchers, reminding her life isn't all about work, awards and bestseller lists. Everyone needs that rainbow to chase.

Karen looks forward to interacting with readers. They can find her at the links below.